The Most Genius Chocolate Chip Cookie Recipe Is Also Vegan 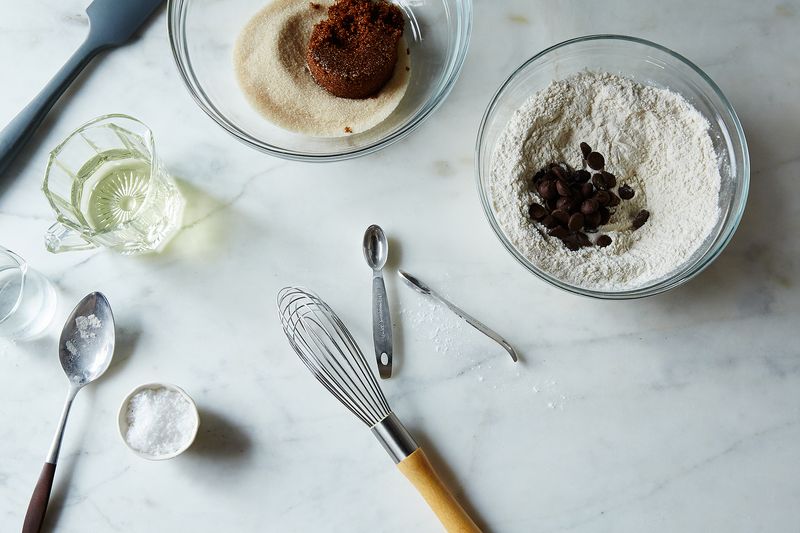 With Genius Recipes correspondent Kristen off for a few months trying to raise a genius newborn, we’re revisiting the column’s Greatest Hits with brand-new videos—and hearing from a few special surprise guests. Wish her luck! (And keep sending those tips.)

World, this is the genius chocolate chip cookie we’ve been waiting for. Oh, and one other thing: It’s vegan.

Notice that I didn’t say it’s genius for a vegan chocolate chip cookie or in spite of it. This cookie, which comes from Ovenly founders Agatha Kulaga and Erin Patinkin, can rest entirely on its own merits: its soft-bellied, chewy, caramelly-crisp-edged, rippled and ringed and puddled with melty chocolate, well-salted, incidentally vegan merits.

I realize this is almost incomprehensible if you grew up, like I did, making chocolate chip cookies by beating soft butter with sugar, then dropping in eggs one by one, ignoring what everyone says about eating cookie dough. But I’ve come to understand some of the kitchen science at work. We’ll get to that, because you’re going to want some talking points.

Even if you’re not vegan, sometimes you’re out of eggs. Or your butter isn’t soft (or, whoops, way too soft). Or you have a new friend or in-law who’s allergic to eggs or dairy. Of course, for the people who’ve been limited to other vegan cookies until now, this recipe is especially miraculous. “No fewer than 3 clients have now mentioned them to me as being extraordinary and the best,” our Vegan cookbook author and columnist (and nutritionist) Gena Hamshaw wrote to me when she tipped me off to the recipe.

Maybe that’s because of the ingredients in other vegan chocolate chip cookies, which are likely to make them taste like a loose, disappointing approximation of the real thing—here are a few examples from the first few pages of Google:

Instead, Ovenly’s recipe uses pretty much standard chocolate chip cookie ingredients, except that they replace the egg and butter (which are largely made up of fat and water) with oil and water (same).

The technique is, if anything, simpler, since there’s no waiting for butter to soften or 2-stage creaming involved—just a vigorous whisking of all the wet ingredients before adding the dry. But there is one crucial extra step: “The dough has to be refrigerated for at least 12 hours and up to 24 hours before being scooped. I know, it’s tempting to skip this step. DON’T,” Kulaga wrote to me. 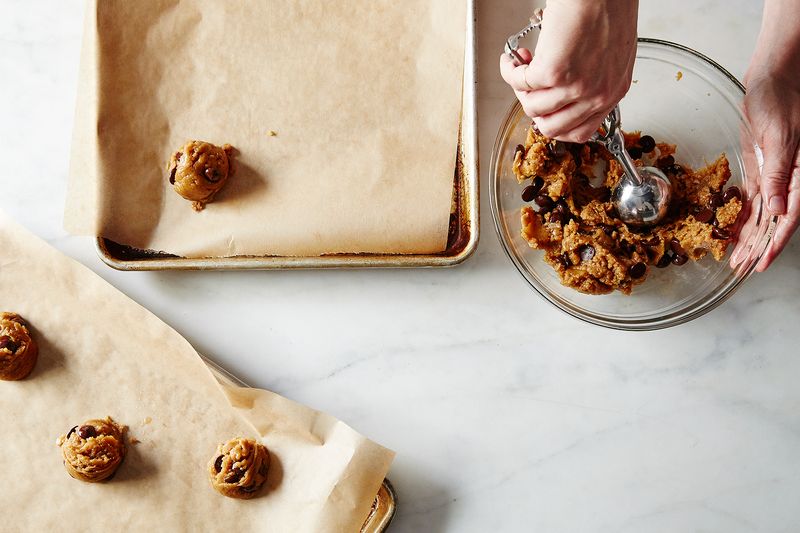 You might have already learned about the dough-refrigerating trick in David Leite’s famous New York Times article from 2008, in which he revealed that all of the top bakeries in Manhattan agree that resting—or hydrating—your dough for a day or three makes for better cookies. The flavor is richer and more developed; the texture smoother, more nuanced, and further away on the spectrum from raw flour.

But the ultimate recipe he settled on, based on Jacques Torres’, had quite a few hurdles—as brilliant as it was. It called for both bread flour and cake flour, and pricey chocolate fèves, and the dough was at its best 72 hours after mixing. Because Ovenly’s cookie dough has no egg to slow down the hydration, it hits its peak much faster.

I tried to break this recipe, Food Lab-style. I’ve made it with both vegan sugars and regular granulated ones (here, I made it with an especially dark brown vegan sugar, which made them a bit flatter, more toffee-colored, and more ripply than the ones Ovenly sells).

I’ve alternately frozen the dough for 10 minutes after scooping and skipped that step; I’ve baked on parchment and bare; I’ve let the cookies cool on the baking sheet and on a rack; I’ve hand-whisked and whipped in on high speed in a stand mixer to varying degrees of whippedness. I’ve forgotten a quart of the dough in my purse for hours, then quickly scooped and froze the dough to pretend it hadn’t happened. The cookies have always been some version of wonderful. 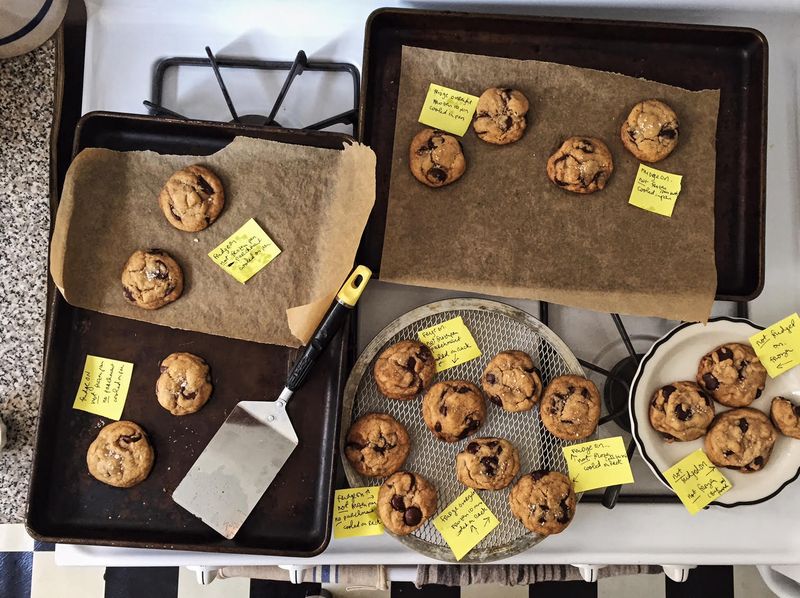 I’ve even baked off the dough straightaway after mixing it (I’m sorry, Agatha! I’m sorry, Erin!). This was the biggest, and perhaps only noticeable, difference—the flavor a bit more flat, the texture a tad coarser. But I fed a lot of these to a lot of coworkers and there wasn’t a problem.

What I found was that these cookies are pretty indestructible, which is more than you can say for most unvegan ones. It’s easy to think there’s something more than kitchen science at play. As Patinkin told me, “There’s no bigger compliment than hearing, ‘If this cookie isn’t made with butter, then it must be made with magic.'” 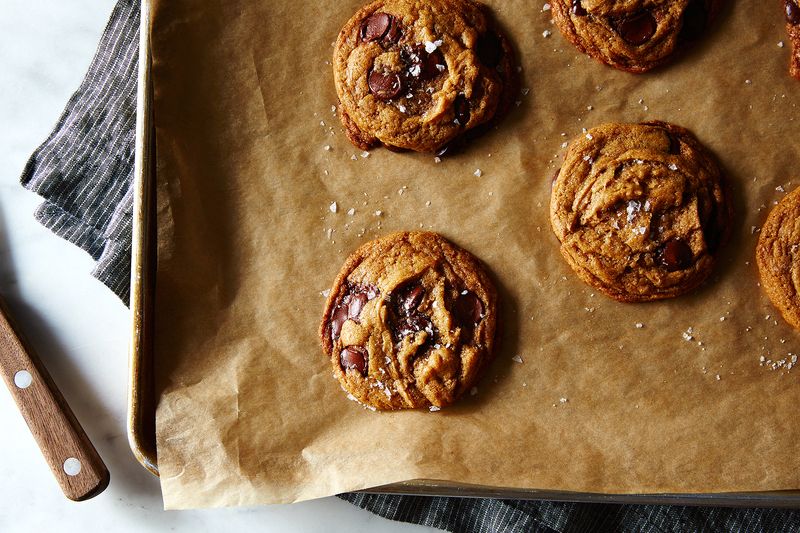 See the recipe (and save and print it) here.

Got a genius recipe to share—from a classic cookbook, an online source, or anywhere, really? Perhaps something perfect for beginners? Please send it Kristen’s way (and tell her what’s so smart about it) at [email protected]